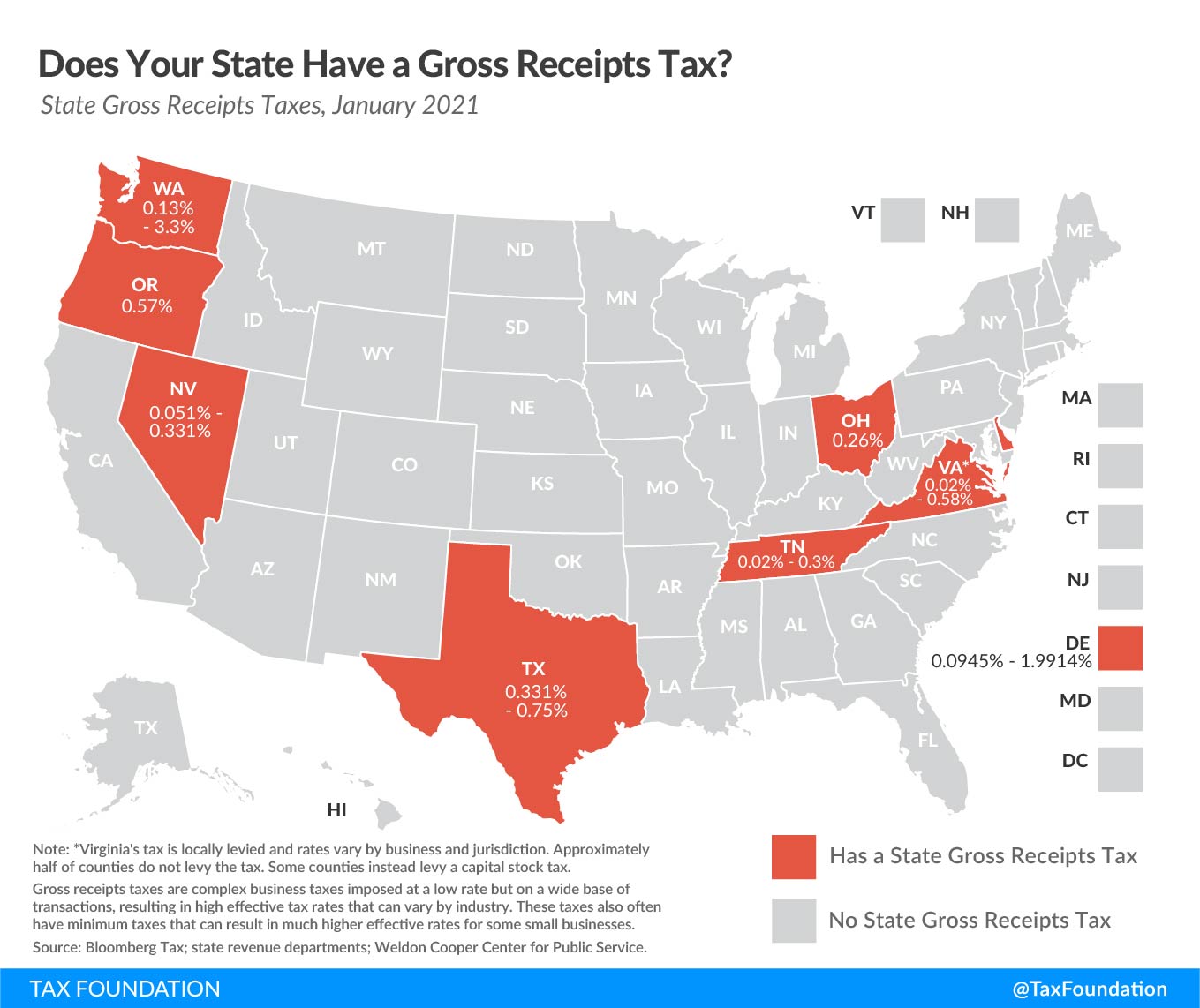 Today’s map looks at which states levy a gross receipts tax, which is often considered one of the most economically damaging taxes. Moving away from state gross receipts taxes would represent a pro-growth change to make the tax code friendlier to businesses and consumers alike, which is especially necessary in the wake of the coronavirus pandemic.

Gross receipts taxes are applied to a company’s gross sales, without deductions for a firm’s business expenses, like compensation and cost of goods sold. These taxes are imposed at each stage of the production process, leading to tax pyramiding.

Seven states currently levy gross receipts taxes, while several others, including Pennsylvania, South Carolina, Virginia, and West Virginia, permit local taxes imposed on a gross receipts base. These taxes gained popularity among states in the 1930s but began to be repealed or struck down as unconstitutional by state courts in the 1970s. Although they have been dismissed for decades as inefficient and unsound policy, they have returned in recent years as states seek to replace revenue lost by eroding corporate income tax bases and to limit revenue volatility.

As the map indicates, states often designate multiple gross receipts rates, typically by industry, to mitigate some of the economic costs associated with these taxes. Businesses and industries with lower profit margins or more stages in the production process—each one taxed separately—are hit harder by gross receipts taxes than are high-margin businesses that are vertically integrated, meaning that more of the work is done in-house (resulting in less exposure to the tax because there are fewer transactions). Differential rates attempt, albeit somewhat crudely, to adjust for these differences on an industry-by-industry basis. Washington’s Business and Occupation Tax has the highest top rate of 3.3 percent, followed by Delaware’s Manufacturers’ and Merchants’ License Tax with a top rate of 1.9914 percent. Ohio and Oregon have flat rates of 0.26 percent and 0.57 percent, respectively.

The tax base and allowable expenditures vary depending on the design of the gross receipts tax. Texas’ Margin Tax allows for a choice of deducting compensation or the cost of goods sold. Nevada allows a firm to deduct 50 percent of its Commerce Tax liability over the previous four quarters from payments for the state’s payroll tax.

Gross receipts taxes impact firms with low profit margins and high production volumes, as the tax does not account for a business’ costs of production like a corporate income tax would. These taxes can be particularly severe for start-ups and entrepreneurs, who typically post losses in early years while still owing gross receipts payments.

These taxes also do not focus on final consumption, as a well-structured sales tax would. They penalize companies that include multiple transactions in their production process. Prices rise as these intermediate taxes are shifted onto consumers, impacting those with lower incomes the most.

Gross receipts taxes impose costs on consumers, workers, and shareholders alike. Moving away from these economically damaging taxes can thus be a part of states’ plans for economic recovery.