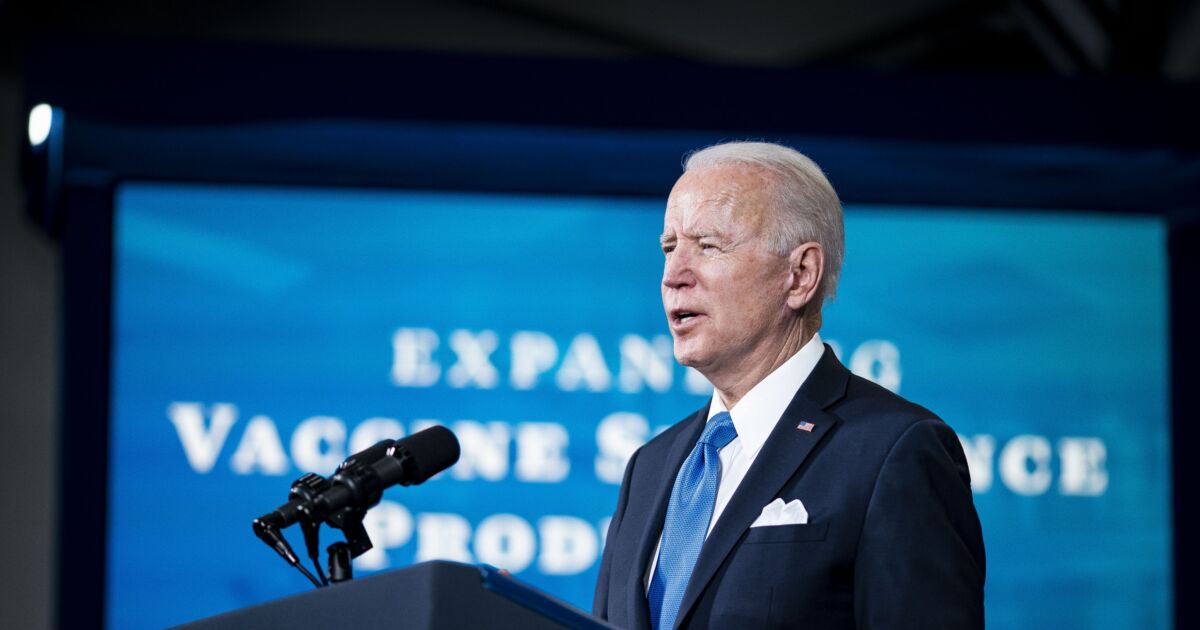 President Joe Biden on Thursday signed the $1.9 trillion pandemic-relief bill into law, capping his first major legislative achievement and allowing aid to flow to tens of millions of individuals, businesses and state and local governments.

Biden signed the bill in an Oval Office ceremony alongside Vice President Kamala Harris, one day sooner than expected. Congress sent the measure to Biden’s desk on Wednesday after the House passed it on a 220-to-211 vote along party lines. No Republicans supported the bill in the Senate, either.

Biden said that large majorities of Americans “strongly support” the bill. “This historic legislation is about rebuilding the backbone of this country,” he said.

The enrolled bill arrived last night — so @POTUS is signing it today — we want to move as fast as possible. We will hold our celebration of the signing on Friday, as planned, with Congressional leaders! https://t.co/4Z1N9WQroN

By advancing the signing, Biden can promote the benefits of the new law during his prime-time address to the nation later Thursday to mark the one-year anniversary of the day the World Health Organization declared a pandemic, and COVID-19 restrictions began to send the U.S. into an economy-crushing lockdown.

Psaki said that Americans will begin to see direct payments from the legislation “as early as this weekend.”

The relief bill’s passage marked a significant political victory for the new president, who showed his command over a Democratic Party that controls Congress by razor-thin margins. Biden engaged in tough negotiations in the Senate, where he served for close to four decades, to win approval for the measure during a two-month-long push to pass it into law.

His administration will spend the next week promoting the legislation, with trips by the president, vice president and their spouses across the country to highlight its impact. Biden will travel to Georgia on Friday, where two Democrats were elected to the Senate in January in part on promises that Americans would receive $2,000 in direct relief payments.

The new bill provides $1,400 to low- and middle-income families, adding to $600 included in stimulus legislation Congress passed in December.

“It’s a place, also, close to his heart,” Psaki said, but emphasized that Georgia will only be the beginning of Biden’s travel to laud the legislation.

Biden’s attention will now turn to a longer-term recovery package featuring infrastructure and climate measures that could cost trillions of dollars more — a program he touted during his 2020 campaign as crucial to pull the U.S. out of its pandemic-triggered recession. But the partisan divisions over the relief bill show the difficult road he faces in passing the next measure into law.

Under the just-passed law, most Americans will begin receiving $1,400 direct payments, with disbursal starting within days. The measure provides additional child-tax credits and new health-insurance subsidies while extending a $300 per week supplemental unemployment benefit into September. State and local governments will get more than $360 billion, cash-strapped union pension funds get a rescue, schools are set to receive money to speed re-opening and funds will go to ramp up vaccinations.

Democrats said the plan provides crucial relief, while Republicans blasted it for what they said was its excessive cost and focus on liberal priorities rather than direct pandemic assistance.

The Biden administration and Democrats are launching a campaign to tout the bill, including events headlined by the president, vice president and cabinet secretaries, White House deputy chief of staff Jen O’Malley Dillon said in a Wednesday memo.

Biden will visit the Philadelphia suburbs next Tuesday, while Harris plans to travel to Las Vegas and Denver on Monday and Tuesday, according to the White House. Harris plans to join Biden on his trip to Georgia next Friday.

This Week’s 5 Must-See Earnings Charts
3 Great Stocks to Buy in August for Safety and Long-Term Growth
The Most Talked About Earnings Charts This Week
Is It Time To Buy META Shares?
Camping World (CWH) and Intel (INTC): 8/4/2022 Bull & Bear