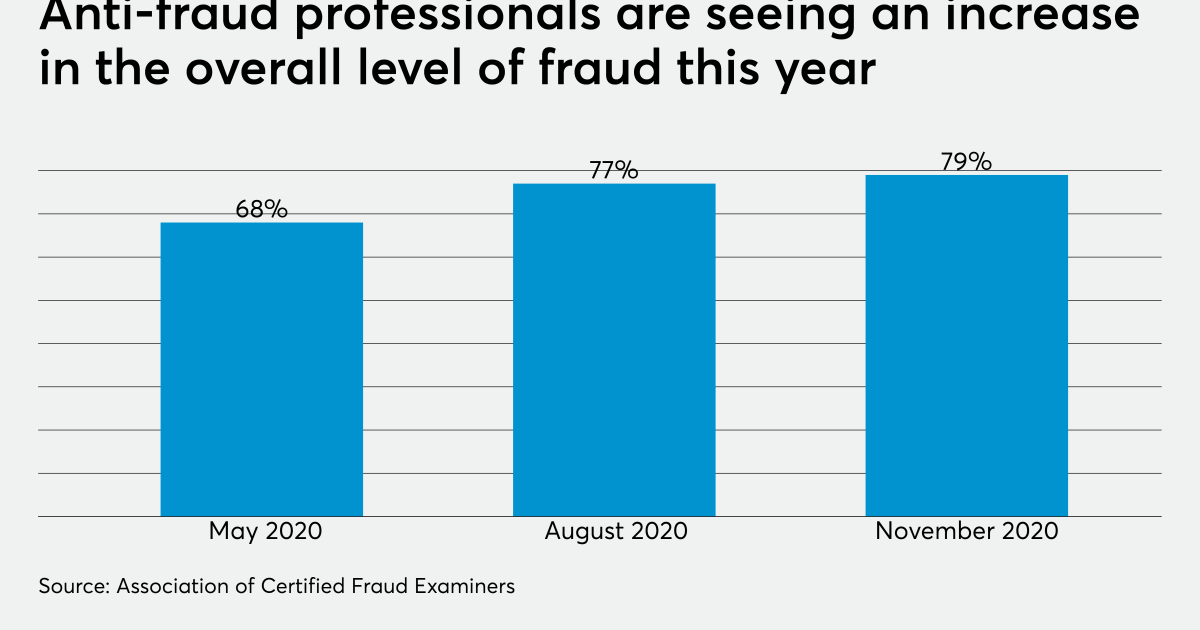 The COVID-19 pandemic could give remote employees around-the-clock access to company funds with little supervision and lead to embezzlement.

The pandemic may be providing opportunities for financial fraud that have yet to come to light. The Association of Certified Fraud Examiners released a report in December that showed the observed level of fraud continued to increase last year, with 79 percent of anti-fraud professionals seeing an increase in the overall level of fraud as of November, compared to 77 percent in August and 68 percent in May (see story). The biggest increase in observed fraud was in financial statement fraud, with 7 percent more anti-fraud professionals reporting seeing it by November than they had in August. Meanwhile, 77 percent of anti-fraud professionals reported that investigating and preventing fraud is more challenging and 71 percent said detecting fraud is more challenging as a result of the pandemic.

Those increases are probably just the tip of the iceberg since much of the fraud committed last year and so far this year probably has yet to surface, given the typical lag times in fraud detection, which are only being compounded by the remote work environment that remains common in many organizations this year. The remote work situation and the economic pressures produced by the pandemic could be accelerating the three factors behind the so-called “fraud triangle”: pressure, opportunity and rationalization.

“One could anticipate there has been a hell of a lot of fraud going on in 2020,” said John Hanson, managing director in BDO’s Forensic Investigation and Litigation Services practice and a former special agent with the FBI. “I think we’re literally facing a tsunami of fraud coming out over the course of the next couple of years, maybe longer.”

The average fraud takes 14 months from the time it begins until the time it’s discovered, he pointed out. “That’s actually down from 18 months in the last couple of years, according to the Association of Certified Fraud Examiners,” said Hanson. “Companies are getting a little bit better at finding it, though most of it is still discovered by accident. Nonetheless, we’re not even at the 14-month point yet with the COVID stuff, with the pressure on the fraud triangle and on human beings for committing fraud.”

Hanson is a CPA who began working in the FBI and later went into the consulting business. “I majored in accounting because at the time, back in 1990, that was the fastest way to get into the FBI,” he said. “You wouldn’t want me doing a financial statement or your tax form, but I’m truly a forensic accountant or an investigator.”

In 1995, he became a special agent working in the FBI’s Washington, D.C., field office, where he focused on wire fraud and mail fraud cases. One of the task forces in the office specialized in investigating white collar fraud cases like the Enron accounting scandal. He did that for about 10 years, and for two years was a full-time instructor at the FBI Academy teaching new agents to investigate white collar crime cases. He left to start his own firm, where he worked as a compliance monitor to make sure companies like Volkswagen complied with agreements with the Environmental Protection Agency over their emissions, before joining BDO.

From his experience at both the FBI and in private consulting, he sees risks from COVID-19 that fit well with the model of the fraud triangle. “When the risk is in three different areas, that increases the risk that a person will commit fraud,” said Hanson. “It increases the opportunity to commit fraud, whether it’s a lack of internal control, such as a segregation of duties due to layoffs coming out of COVID, for example. You could be a smart guy or a smart lady who has been on the job for a while or is an accountant, for example, who can devise ways to circumvent controls that maybe a different person couldn’t do. In a lot of the layoffs that occurred during COVID-19, you’re not letting go of your best and brightest. You’re trying to hold onto them because you want them there when the business comes back. So, as you’re letting go of lower-level people and not segregating duties and controls anymore, you’re actually putting people into positions where they could cheat or steal or create opportunity that you wouldn’t ordinarily have.”

But COVID-19 is making it harder to not only detect fraud, but also to investigate and interview suspects. “What has stopped is the ability to go out and do interviews, the ability to go in front of a grand jury, the ability to do things that we normally would do to investigate,” said Hanson. “So, what do you do when you can’t move a case? You let them pile up, you work the easy ones. The first ones that you can do, you hurry up and you work on those. But the more sophisticated, the really hard core, complex financial statement fraud, all of that kind of stuff is sitting there right now because they can’t really move them through the system. And as COVID begins to break, those cases have got to get worked. You’re up against a five-, sometimes a 10-year statute of limitations, and they’re going to have to start rolling out.”

The ability to do face-to-face interviews has become more difficult due to COVID. “It’s hard to get out there and work that network,” said Hanson. “It doesn’t work the same over the phone. It’s hard to do investigations when you can’t go and physically inspect an office or you can’t go in physically to speak to a person. For a procedural interview where you’re just trying to learn how the process works, that’s no big deal. We can talk on the phone and you can walk me through the process. Maybe you can screen share and show me whatever. But if you’re dealing with an interview where you’re trying to get somebody to admit to doing something wrong, you are not going to do that over the phone. You are not going to do it over a virtual feed. You need to sit down with the person. Frankly, you need to be decent at doing an interview in the first place. But they’re not going to confess to you that they were engaged in misconduct unless you’re in the room with them. That’s created some difficulties for compliance officers, internal auditors, lawyers, general counsel, as well as external lawyers.”

Nevertheless, firms still need to do the investigations for clients, especially if there’s a danger that the fraud will keep happening if it’s not stopped. “We’re still doing independent investigations,” said Hanson. “When companies have misconduct, it’s not like they’ve stopped calling in people like me and lawyers to come in and independently investigate the misconduct and to report to the board and make disclosures and all the other stuff that follows after that. But my ability to conduct those investigations is not as good as it was before because of the inability to personally interact. My work as a monitor is impacted. For me being out there, my job is to assess compliance with the terms and conditions of a settlement agreement. I need to talk to people.”

Companies need to be on the lookout for some of the red flags of fraud and motivations that could be exacerbated by factors like rationalization and opportunity. “They are able to rationalize that misconduct and think it’s OK,” said Hanson. “In one case, I had a lady who was an assistant controller for about 15 years in the job. When the controller finally retired or died, she thought that she was going to take that job, but she didn’t get it. One of the bosses ended up putting his kid in who had just graduated from college. It pissed her off, and she was thinking, he took my job. You can use that to rationalize why she started stealing from the company like it was owed to her.”

Personal financial need can be another powerful factor, especially with the economic downturn from the pandemic. “It’s a perceived unfavorable personal financial need,” said Hanson. “If it’s one that I am experiencing as an employee, I don’t feel like I can come to you and say, ‘Hey, look, I’ve been hurting real bad. I got hurt a few years ago. I was on these pain medicines. I can’t get them anymore, but I still have the pain and would you spot me 20 so I can go get an eight ball out on the street where I can alleviate my pain.’ You’re going to say, ‘Hell no, and by the way, you’re fired.” So, they can’t come to you for that. But it also could be they’re going through a divorce or they jacked up their credit cards trying to keep up with the Joneses, or they’re just not good financial management people and they don’t want to let you know that. They feel you will judge them in some negative way. And so they perceive that financial need, whether it’s nefariously driven or just honestly driven, that they can’t share it with you. They have a need for money, so when those three things come together, that’s when a person steals.”

The three legs of the fraud triangle — pressure, opportunity and rationalization — all come together in the time of COVID.