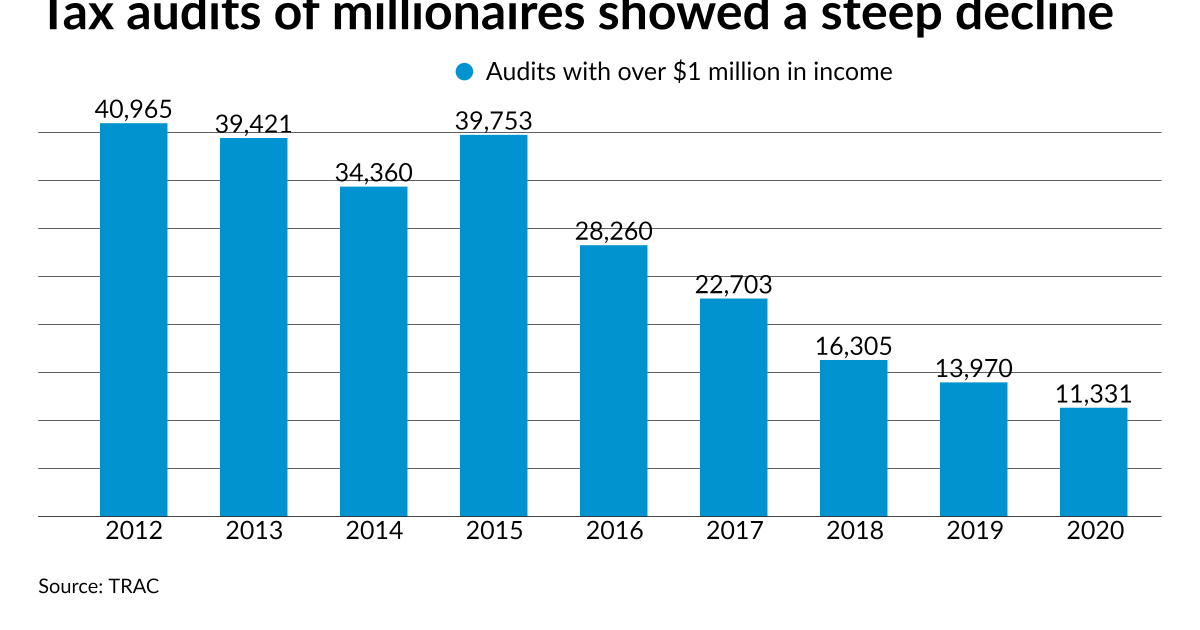 Fewer than two out of every 100 taxpayers reporting over $1 million in income were audited by the Internal Revenue Service in fiscal year 2020, according to a new report.

The report, released Thursday by Syracuse University’s Transactional Records Access Clearinghouse (TRAC), found that while the ranks of millionaires have nearly doubled since fiscal year 2012, the number of millionaire returns that were audited by the IRS has fallen 72 percent, down from 40,965 in fiscal year 2012 to only 11,331 in FY 2020.

The report comes at a time when the U.S. is confronting growing concerns about income inequality, especially in the midst of the financial hardship caused by the COVID-19 pandemic. During a congressional hearing Thursday on the status of this year’s tax-filing season, IRS Commissioner Chuck Rettig was asked by lawmakers on the House Ways and Means Oversight Subcommittee about IRS audit rates and whether increased enforcement could help the IRS with its perennial budget woes. The extra tax revenue brought in by increased IRS enforcement could also help pay for the ballooning budget deficit as Congress appropriates trillions of dollars in aid to help alleviate the impact of the pandemic. The report argues that the IRS is allowing billions of dollars in tax revenue to “slip through its fingers” due to budget and staffing cuts at the agency that have left it unable to effectively audit the 637,212 millionaires living in the U.S.

“Over the past decade, Congress has imposed severe funding and staffing cuts at the Internal Revenue Service, cuts that have seriously undermined the agency’s ability to administer tax laws in a fair and effective manner,” said the TRAC report. “At the same time, Congress has handed the IRS new responsibilities, including coping with major changes to the tax law and sending out repeated rounds of stimulus payments to millions of taxpayers. The latest round of $1,400 stimulus checks is just going out now while the IRS is busy with the current tax filing season.”

To be sure, in recent years, Congress has increased funding to the IRS to implement the stimulus packages, the Tax Cuts and Jobs Act and the Taxpayer First Act. But before that happened, the IRS faced a series of budget cuts after a scandal erupted in 2013 over the IRS’s slow approval of tax-exempt status for some conservative groups. Some of the biggest budget cuts in the past decade have reduced the number of IRS revenue agents. The decline in revenue agents undermines the IRS’s auditing work because revenue agents are the only auditors who are supposed to examine complex tax returns. Complicated tax returns from both individuals and businesses are typically the kinds of returns that could yield the most tax revenue, and fewer revenue agents at the IRS translates into fewer audits of wealthy tax filers and large companies.
Criticism has been growing over the low rate of tax enforcement for millionaires and billionaires, in contrast to the examination rate for lower-income taxpayers who claim the Earned Income Tax Credit, whose audits are usually easier to do since they typically depend more on wage income as opposed to investment income.

A report earlier this month from the Treasury Inspector General for Tax Administration found that the IRS failed to collect $2.4 billion in tax debts from millionaires who owed back taxes (see story).

The same pattern held on the corporate tax side. Nearly two out of every three of the 755 biggest corporations in the country — those with $20 billion-plus in assets — weren’t audited last year. As recently as 2012, close to all those returns (93 percent) were being examined by IRS auditors.