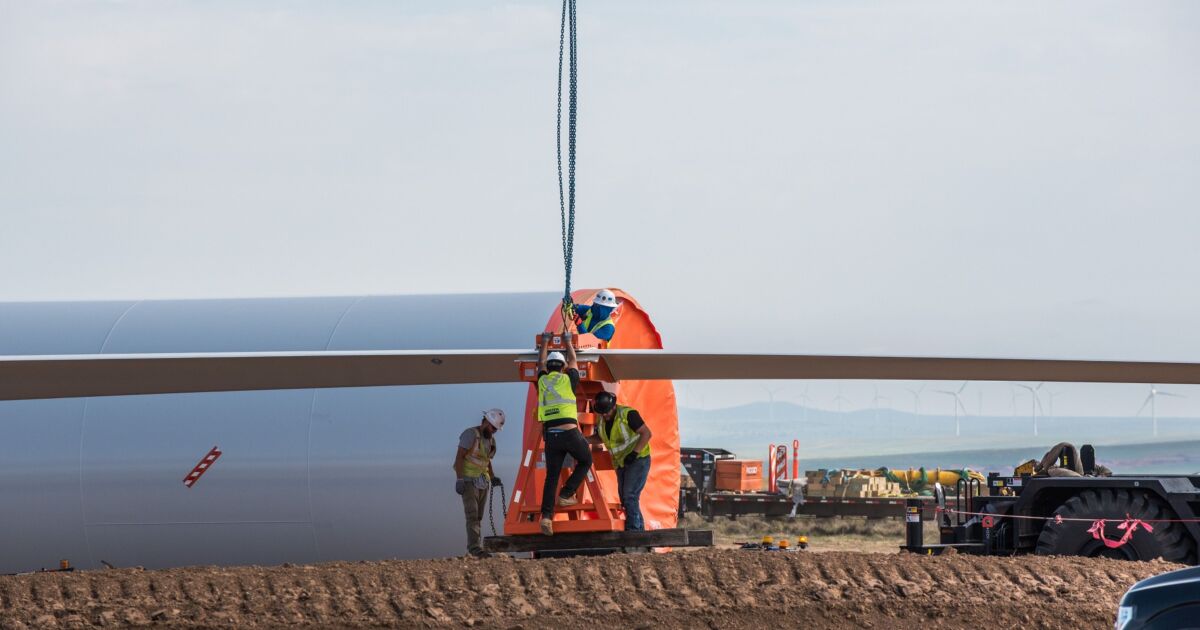 The clean energy industry is rushing to hitch a ride on President Joe Biden’s emerging infrastructure plan, lobbying for a decade-long extension of coveted tax credits as the White House drafts a recovery proposal that could top $3 trillion.

Lobbyists for the industry want to attach the long-term extension of credits used by the wind, solar and other industries, to the plan — a windfall that would be worth billions of dollars if successful.

“The floodgates are open,” said Paul Bledsoe, a former Senate Finance Committee staffer now with the Progressive Policy Institute. “Everyone is trying to get the maximum amount.”

Supporters are counting on Congress to use the budget reconciliation process that allows passage of some tax and spending legislation on a simple majority vote to move the infrastructure bill, since it is unlikely to garner enough Republican support. Republicans used the process in 2017 to mandate the sale of Arctic drilling rights.

The Biden administration has signaled it supports broad-based extensions of clean energy tax credits as part of Biden’s ambitious plans for fighting climate change. That includes a call to decarbonize the electric grid by 2035 and for carbon neutrality by 2050.

White House national climate adviser Gina McCarthy said March 11 that clean energy tax credits would be part of the administration’s recovery proposals. “We have to look at every tool in our toolbox,” she said.

Among the backers of the push for tax incentives is the solar energy industry, which is making the argument to lawmakers that a 10-year extension will provide the consistency the solar sector needs to be effective.

It can’t be “a two-year investment tax credit and then move on to some other bright shiny object,” Abigail Ross Hopper, president and chief executive officer of the Solar Energy Industries Association, said in an interview. “It will need to be sustained.”

The effort won’t be a slam dunk. Conservatives are already mounting an effort to fight the plan, said Tom Pyle, a former adviser to Donald Trump and the president of the American Energy Alliance, a free-market advocacy group.

“It’s laughable that on the one hand they claim the industry is the cheapest form of energy and that they are the fastest growing and on the other hand they are lobbying the government for 10 more years of handouts,” Pyle said in an interview. “The message I’m getting is they still need federal assistance to be a viable industry.”

Congress extended the investment tax credit used for residential and commercial solar projects at its current rate of 26 percent for two years in December 2020 as part of a $2.3 trillion spending and coronavirus relief bill.

Other backers of the effort include the hydropower industry, which supports a 10-year extension of both the investment tax credit and production tax credit used by the renewable energy industry.

“Developers need long-term certainty to accommodate the lengthy development process for these capital-intensive facilities,” said Malcolm Woolf, president of the National Hydropower Association, a Washington-based trade group, which is also calling on Congress to create new tax incentives to help the industry preserve its existing fleet of dams.

The forthcoming infrastructure package, set to be a core part of Biden’s longer-term economic plan and estimated in the trillions of dollars, could also provide a pathway for extending a lucrative consumer tax-credit for the purchase of electric vehicles.

“Any infrastructure package must include green priorities, and those priorities certainly include support for the decarbonization of the transportation sector, which means personal and commercial EVs as well as charging infrastructure,” said Representative Don Beyer, a Virginia Democrat who serves on the House’s tax writing committee.

And the energy storage industry supports efforts to make the stand-alone storage projects eligible to receive the investment tax credit “at the same levels and timeframes as other clean energy industries,” Jason Burwen, interim chief executive officer of the USA Energy Association, said in a statement.

“If you’re clear-eyed about where we are relative to where the science says we need to be, that means going big — and part of going big is moving beyond endless cycles of short-term stopgap measures toward a stable, predictable and long-term tax platform that puts millions of Americans back to work building a 21st century clean energy economy,” said Bill Parsons, chief operating officer for the American Council on Renewable Energy, a trade group.

Suzanne Leta, the head of policy and strategy at SunPower Corp., said a 10-year extension of the ITC is a top priority.

“We believe strongly that the first and most important thing the Biden administration and Congress can do is a long-term ITC extension with parity for individuals and corporations,” Leta said in a phone interview. But lawmakers can help further by making that credit refundable, even temporarily, as tax equity financing dries up.

— With assistance from Jennifer A. Dlouhy and Brian Eckhouse