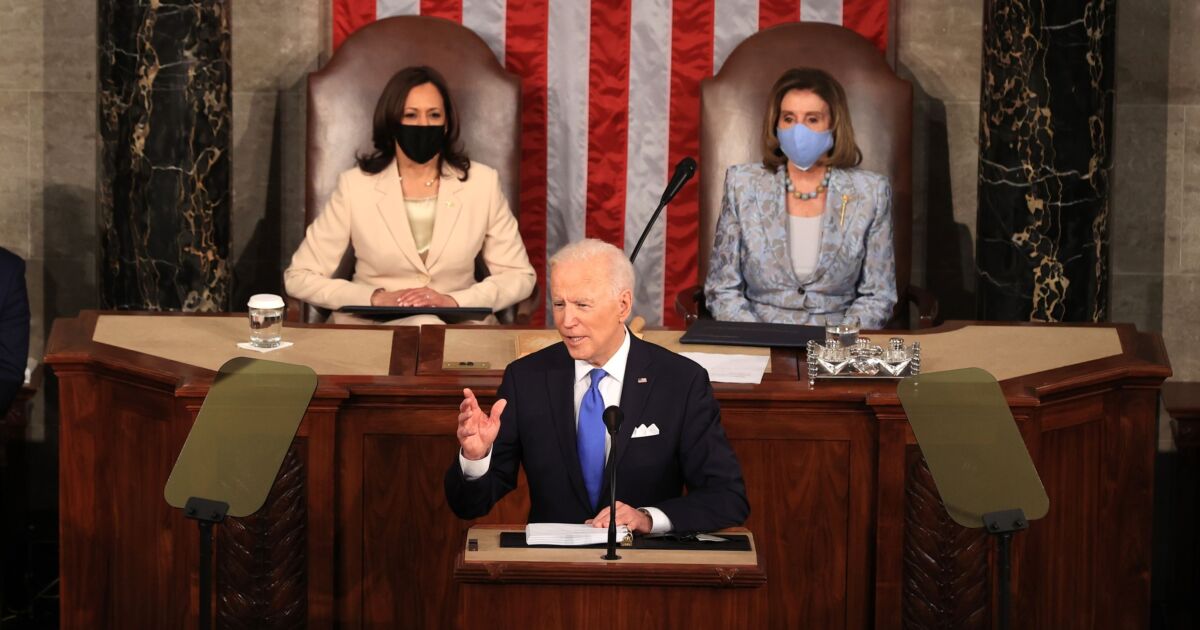 The administration unveiled the proposals on Wednesday ahead of Biden’s address to a joint session of Congress on Wednesday night (see story). The plan would extend the Child Tax Credit increases of up to $3,000 or $3,600 per child, depending on their age, in the earlier American Rescue Plan through 2025 and make the CTC permanently refundable, according to a White House fact sheet. It would also extend the American Rescue Plan’s discounts on premiums provided through the Affordable Care Act’s Premium Tax Credit and make the premium reductions permanent. Biden also wants to permanently extend the temporary expansion of the Child and Dependent Care Tax Credit in the American Rescue Plan to $4,000 per child or $8,000 for two or more children. It would also make the Earned Income Tax Credit expansion for childless workers permanent.

To pay for those and other programs, the American Rescue Plan and the infrastructure plan, known as the American Jobs Plan, would raise taxes on upper-income households, investors and large corporations, but Republicans have also expressed their resistance to raising taxes, making it difficult for Biden to pass the proposals in a closely divided Congress. The top income tax rate for individuals would increase to 39.6 percent, and for corporations it would go back up to 35 percent. However, Biden expressed his intention to negotiate with Republicans and Democrats to come to an agreement in the months ahead.

“So how do we pay for my Jobs and Family Plans? I’ve made clear that we can do it without increasing deficits,” said Biden. “Let’s start with what I will not do. I will not impose any tax increases on people making less than $400,000 a year. It’s time for corporate America and the wealthiest 1 percent of Americans to pay their fair share. Just pay their fair share. A recent study shows that 55 of the nation’s biggest corporations paid zero in federal income tax last year. No federal taxes on more than $40 billion in profits. A lot of companies evade taxes through tax havens from Switzerland to Bermuda to the Cayman Islands. And they benefit from tax loopholes and deductions that allow for offshoring jobs and shifting profits overseas. That’s not right. We’re going to reform corporate taxes so they pay their fair share – and help pay for the public investments their businesses will benefit from. And, we’re going to reward work, not wealth. We take the top tax bracket for the wealthiest 1 percent of Americans — those making $400,000 or more — back up to 39.6 percent. That’s where it was when George W. Bush became president. We’re going to get rid of the loopholes that allow Americans who make more than $1 million a year pay a lower rate on their capital gains than working Americans pay on their work. This will only affect three tenths of 1 percent of all Americans.”

“And the IRS will crack down on millionaires and billionaires who cheat on their taxes,” said Biden. “That’s estimated to be billions of dollars. Look, I’m not out to punish anyone. But I will not add to the tax burden of the middle class of this country. They’re already paying enough. What I’ve proposed is fair. It’s fiscally responsible. It raises the revenue to pay for the plans I’ve proposed that will create millions of jobs and grow the economy. When you hear someone say that they don’t want to raise taxes on the wealthiest 1 percent and on corporate America – ask them: whose taxes are you going to raise instead, and whose are you going to cut?”

Republicans are already criticizing the plan. “Even more taxing, even more spending to put Washington even more in the middle of your life from the cradle to college,” said Sen. Tim Scott, R-South Carolina, who delivered the Republican response to Biden’s speech.

“President Biden inherited a strong economy and life-saving vaccines, yet he is sabotaging America’s economic recovery with crippling tax hikes that hurt working families and drive jobs overseas,” said Rep. Kevin Brady, R-Texas, the top Republican on the tax-writing House Ways and Means Committee. “It’s the last thing we need right now. Mr. President, what happened to your pledge to unify America and work to find common ground with both parties? Why not start over, ditch this extreme socialist agenda, and stop trying to tax, spend, and borrow from our children’s future. We can do so much better together.”

Brady helped spearhead passage of the Tax Cuts and Jobs Act of 2017 through his committee and the House, but Biden pointed to the law’s shortcomings and vowed changes. “Look at the big tax cut in 2017,” he said. “It was supposed to pay for itself and generate vast economic growth. Instead it added $2 trillion to the deficit. It was a huge windfall for corporate America and those at the very top. Instead of using the tax savings to raise wages and invest in research and development — it poured billions of dollars into the pockets of CEOs. In fact, the pay gap between CEOs and their workers is now among the largest in history. According to one study, CEOs make 320 times what their average workers make. The pandemic has only made things worse: 20 million Americans lost their jobs in the pandemic — working- and middle-class Americans. At the same time, the roughly 650 billionaires in America saw their net worth increase by more than $1 trillion. They are now worth more than $4 trillion.”

Tax practitioners are fielding questions from their clients about the possible changes in the tax rates and the rules regarding capital gains and now the administration’s new proposal to get rid of the step up in basis for estate taxes. “The estate tax still exists,” said Tim Speiss, co-leader of EisnerAmper’s personal wealth group. “As a matter of fact, we often advise clients of one of the benefits. It’s a bit macabre to say this, but if you hold assets until death — and many people have this as part of their estate planning strategy under current law — there’s a way to hold assets until death and then get a basis step up, and then if the asset is sold by the estate, there’s no capital gains tax. It’s not certain if that provision is going to remain or not.”

The first $1 million would be exempted from the step up in basis under Biden’s plan. The plan also proposes to increase the capital gains rate to 39.6 percent from its current level of 20 percent for investors who earn at least $1 million. However, the plan does not include an increase in the estate tax rate or to lower the exclusion amount.

Tax attorneys too will be counseling their clients about how to adjust to the possible changes proposed by Biden. “He’s basically doubling the capital gains rate for a lot of clients,” said Edward Renn, a partner on the private client and tax team at the international law firm Withers, who focuses on wealth preservation, income maximization strategies and international tax planning. “I’m not an economist, but many economists would tell you that that’s probably neither good for the economy nor good for the stock market.”

He believes raising the capital gains rate would probably cause investors to hold assets longer than they otherwise would in order to avoid the tax. “But the scarier thing, or the thing that’s going to most destabilize tax and estate planning is this notion that the step up in basis point is going to go away,” said Renn. “The way I read this proposal, and it’s not absolutely clear, but he makes it sound like it’s going to be that you’re going to have a recognition event at death, that you’re going to be mark-to-market taxed on the assets at death rather than have a carryover basis. The nice thing about a carryover basis would be you still don’t pay tax until you have a recognition event. The problem with mark-to-market at death is you basically have to have a fire sale to come up with the cash to pay the tax.”

The $1 million exclusion will help with inheritance taxes, however. “I was encouraged by basically a middle or upper middle class exemption amount,” said Renn. “Everybody will have a million dollars of step up available to them, and combined with the principal residence, a married couple will have two and a half. It doesn’t do much for a guy who spent 35 years building a business, only to sell it, because he’s getting to the point in time that he wants to retire. It’s encouraging to see some acknowledgement that there would be relief provisions for farms and businesses staying in the family. The devil’s in the details. What are the definitions going to be in terms of what qualifies and what kind of level of ownership is going to have to be retained? That kind of thing obviously is all going to need to be fleshed out. But that was a positive. Taking the net investment income tax and expanding from passive investments to active general partners I was a little surprised by, but it’s a proposal.”

The negotiations will certainly change many of those proposals in the months to come. “I’m not sure that where this legislation starts is going to be where the legislation ends up,” said Renn. “The surprise was really the fact that the estate planning changes, or at least some of them, weren’t there. At the last minute, they pulled the estate planning piece that either pertains to exemption amounts and to change the estate tax rates.”

The loss of a step up in basis still made it into the plan, but that too could change. “Depending on how they write it because it may be under some systems where you’ve got mark-to-market if you gift your kids $15,000 worth of stock with a low basis, that’s a tax recognition event too.”

He has been hearing concerns from clients about the proposed changes. “Clients are very animated by both the capital gains rates and the loss of step up,” said Renn. “Unfortunately, there’s only so much you can do about it. If you’re going to sell the assets soon anyway, sell it when you know what the tax rate is, that it’s low. Nobody’s going to give you a tax cut in the next six months. They may give you a significant tax hike.”