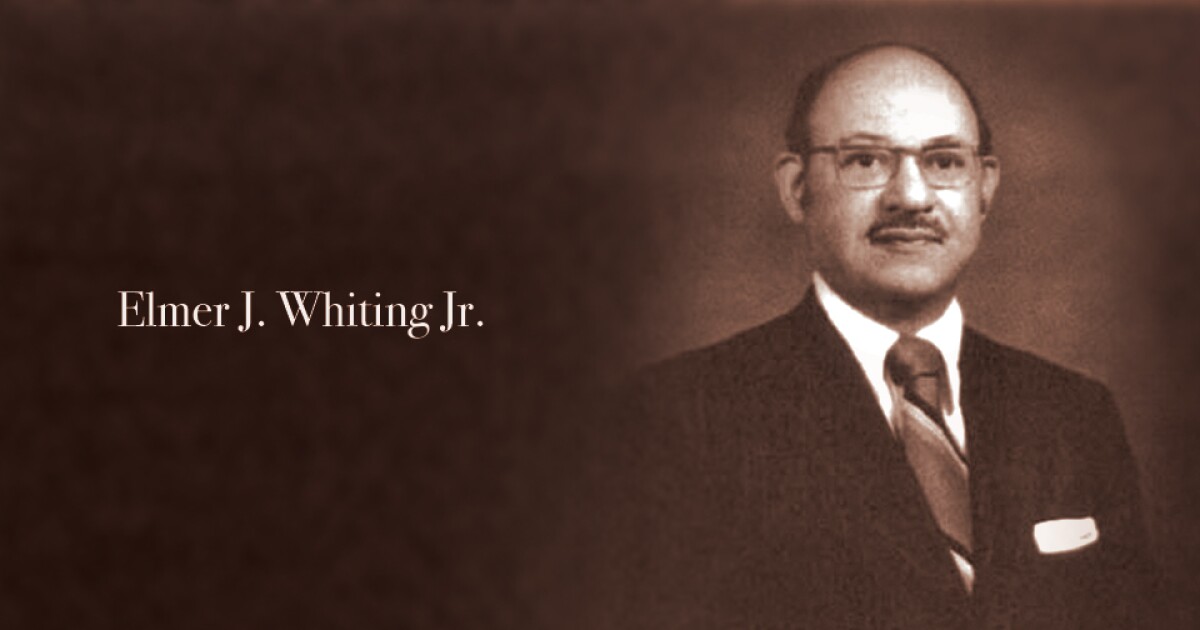 Fifty years after the first Black CPA received his license, Elmer J. Whiting Jr. broke an important barrier when in 1971 he became the first Black partner of a Big Eight firm, as the largest national accounting firms were called at the time. Whiting was already a trailblazer, having been the first Black CPA in Ohio and the 25th Black CPA in the country. His journey demonstrates the significant impact that leaders like Whiting had within and beyond the profession.

When Whiting started his career, he was so eager to launch a CPA firm that for his honeymoon, he traveled from his hometown in Cleveland to Detroit to meet Richard Austin, a successful Black practitioner, according to Prof. Theresa Hammond’s “A White-Collar Profession: African American Certified Public Accountants Since 1921.” Whiting also met with Mary T. Washington Wylie, the first female Black CPA, who hired many young Black accountants in her Chicago firm so that they could gain the experience they needed to qualify for licensing. In an interview with Hammond, Whiting told her, “I met them because I wanted to know where the alligators were when you’re starting a practice,” referring to the challenges a Black CPA would face.

Whiting graduated from Howard University in the 1940s and went on to receive an MBA from Case Western University and a law degree from Cleveland-Marshall College of Law. In an oral history project recording for Cleveland State University, his wife, Carmel, described him as someone who had a strong vision for his future. Although he passed the CPA exam on the first try, he found it impossible to get the experience he needed to become a CPA, because white-owned firms believed their clients would not work with Black staff. Undaunted, he finally got his license in 1950 by successfully petitioning to have bookkeeping work counted as valid experience. Once his own Cleveland firm was up and running, it provided the required experience for licensure to the next five Black CPAs in Ohio, including Whiting’s own brother. Whiting told Hammond that he didn’t have to recruit. “I had a parade of kids coming in here looking for a job. There was nobody else to go to,” he said.

Whiting also was actively involved in other efforts to open doors for Black people. At midcentury, many companies said they were willing to hire Blacks but could not find any who were qualified for professional jobs. With the encouragement of the Urban League, Whiting would apply for jobs at those organizations to demonstrate that qualified Blacks did indeed exist, his wife recalled in her oral history. During his career, his long list of achievements included serving on a city finance committee in Cleveland under Carl Stokes, the first Black mayor of a major American city and a law school friend of Whiting’s.

“He was important to the profession even before he became the first Black Big Eight partner,” said Sam Johnson, Americas vice chair of accounts at EY.

A symbol, and more

In 1971, Ernst & Ernst, as it was known at the time, approached Whiting about merging in his existing practice. Although a small but growing number of Black CPAs had been able to build their own practices in the early and middle 20th century, none had ever risen to the leadership level at a national firm. That made Whiting a powerful symbol of what was possible, according to Johnson.

“To look up and see someone in the firm who looked like you, that is really inspiring” for other Black CPAs, Johnson said. In addition, for the firm’s white partners, “Whiting was a colleague who looked different but who was also capable,” he said, which helped break down any negative stereotypes about Black professionals. His presence inspired a conversation within the firm on the importance of diversity, equity and inclusion that continues to this day.

On another front, “Whiting put a face on a profession that was not well known in our community,” Johnson said. While those in underserved communities may have been familiar with doctors, lawyers and teachers, they may not have known about the opportunities in the accounting profession if prominent leaders like Whiting had not made a name for themselves on a national stage, Johnson said.

One example of Whiting’s impact can be seen in the career of one of his employees, Thomas Watson Jr. When Whiting merged his firm into Ernst & Ernst, Watson, who had an entrepreneurial spirit, decided to model Whiting’s leadership and step out on his own. He teamed up with another Black CPA, Robert Rice, to found Watson Rice & Co. (now known as BCA Watson Rice LLP), which at one point during the 1980s was the largest Black-owned CPA firm in the world, according to Watson’s son, Timothy Watson, who is also a CPA.

Like Whiting, Thomas Watson exemplified a path to success. Timothy Watson remembers spending a great deal of time at his father’s Washington, D.C., firm as a child, sitting in during audits and business meetings. “I didn’t always understand what was going on, but I learned enough to know I wanted to follow in my father’s footsteps,” he said.

When Whiting died in 1995, Mayor Stokes’s brother Louis, a congressman from Cleveland, read a tribute to him into the Congressional Record. He noted, “Those of us who had the privilege of knowing Elmer will always remember him as a pioneer and champion.”

“Being first at anything was simply never enough for him,” said Mark McBride, a fellow Black CPA and attorney who spoke at a ceremony dedicating a portrait of Whiting at Cleveland-Marshall College of Law after his death. “Being the best at whatever he did was more important to Elmer.”

For the young Black CPAs who worked with Whiting and those who simply learned of his accomplishments, he opened new doors and career opportunities.

The Black CPA Centennial is a yearlong effort to honor, celebrate and build upon the progress Black CPAs have made in shaping the accounting profession. The celebration is a collaborative effort of the AICPA, Diverse Organization of Firms, Illinois CPA Society, National Association of Black Accountants, and National Society of Black CPAs.