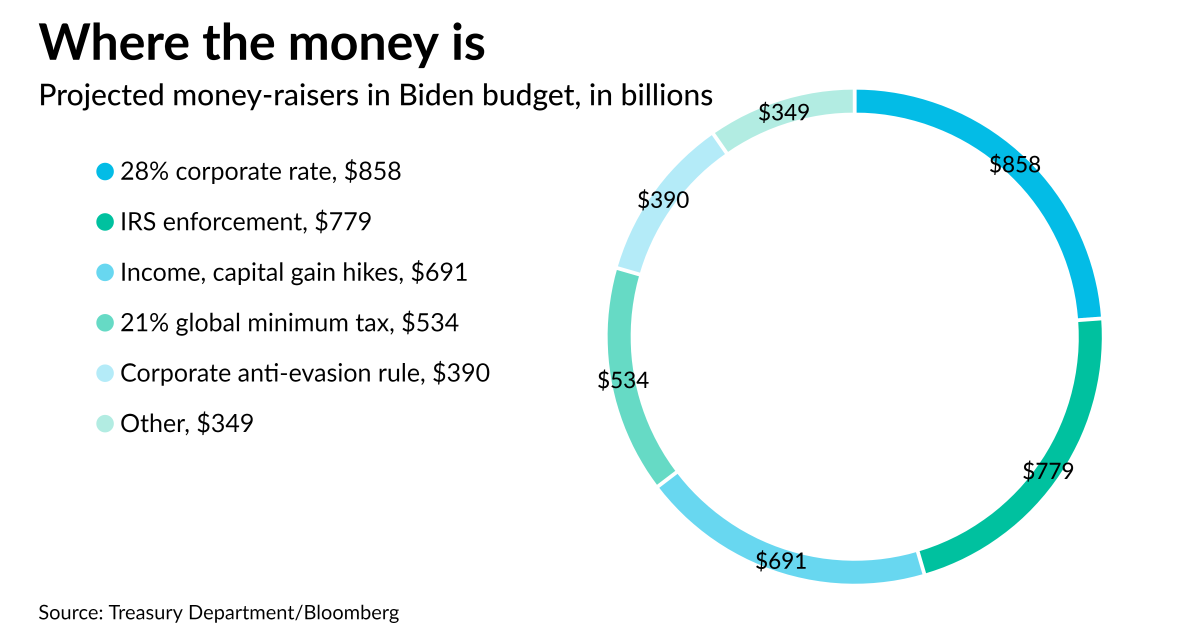 President Joe Biden’s proposed tax hikes are forecast to bring in $3.6 trillion over the next decade, the Treasury Department said Friday, a key funding source for the $4 trillion he hopes to spend remaking the American economy and social safety net.

The figure, representing the sum of all tax increases if enacted by Congress, came as is part of the “Greenbook” report that accompanies the White House’s $6 trillion 2022 budget request, also released on Friday. It effectively serves as the revenue side of the ledger, against Biden’s spending priorities in the budget.

After accounting for the $1.2 trillion in tax credits for clean energy, electric cars, low-income families and housing investment, the plan would net Biden about $2.4 trillion to invest in other economic priorities. The White House has said that the $4 trillion combination of its American Jobs Plan and American Families Plan would be fully paid for over 15 years.

The Greenbook, which hasn’t been released since President Barack Obama’s final year in office in 2016, is the most comprehensive look at the tax and revenue proposals the administration endorses.

The document spans the gamut of Biden proposals, including a global minimum corporate tax, an increase in the levy on capital gains at death and closing the carried interest tax break for fund managers, all of which Biden has already outlined in his funding proposals for his longer-term spending plans.

The Greenbook proposal assumes the capital gains increase would take effect on the date it was announced, a Treasury official said on a call with reporters. That proposal was announced in late April.

The reason for doing that is to prevent acceleration of gains during a temporarily low tax rate, another official said. But Treasury will work with Congress to determine the appropriate effective date, the person said. The large majority of the other tax increases are slated to go into effect in 2022.

The retroactive tax hike on capital gains is unlikely to make it through Congress in its current form given Democrats’ thin majorities and lawmakers’ general distaste for raising taxes without giving people a fair warning, said John Gimigliano, who leads federal tax legislative services at KPMG LLP.

The Greenbook also includes key tax-credit proposals that Democratic lawmakers see as crucial to campaign on during the 2022 midterm elections. The administration is calling for an extension of an expanded child tax credit through 2025, as well as benefits for green energy and electric vehicles.

While Congress is unlikely to enact Biden’s tax ideas wholesale, the Greenbook has political significance by detailing the proposals that have the support of the White House.

Democrats will likely have to scale back some of the ideas to be able to pass them through their razor-thin majorities in Congress. Some Senators, including Joe Manchin of West Virginia and Mark Warner of Virginia, have expressed concerns about Biden’s corporate tax rate and capital gains plans.

Pressure from moderates to pare down the tax proposals, along with procedural rules in the Senate, could both prove to be stumbling blocks as Democrats negotiate.

On the flip side, the Treasury outline omits a key priority for some House Democrats: an expansion of the state and local tax, or SALT, deduction. More than 20 lawmakers from high-tax states have said they would oppose Biden’s economic agenda unless it also included an expansion of that write-off, which is currently capped at $10,000.

The Greenbook also details other previously announced proposals, including one to impose taxes at death on inherited property for large gains accrued during the prior owner’s lifetime. The proposal would also prevent private-equity and hedge fund managers from applying the long-term capital gains tax rate to their portion of the fund’s profits, known as carried interest, if their overall taxable income exceeds $400,000.

Biden’s proposals also call for $2 trillion in additional business-tax revenue over the next 10 years from changes like boosting the corporate tax rate, raising the minimum taxes paid by U.S. companies on their foreign income and revamping efforts to combat companies’ attempts to shift profits offshore.

A Treasury official said the administration plans to work with Congress on proposals to create a new research-and-development tax incentive to replace one created under President Donald Trump, but declined to give details on what that tax break could look like.

Another idea omitted from the Greenbook was something Biden campaigned on: repealing a 20% small business deduction created in the 2017 Republican tax law for high earners. Some plans didn’t appear in the Greenbook because they require more policy development, a Treasury official said. Others will likely show up in future budgets, the official said.

Is Disney (DIS) a Buy Heading into Q3 Earnings Announcement?
Top Stock Picks for Week of August 8, 2022
This Week’s 5 Key Earnings Charts
Time to Buy These Giant Tech Stocks as the Nasdaq Enters a Bull Market?
This Insurance Company Is Pushing 52-Week Highs.