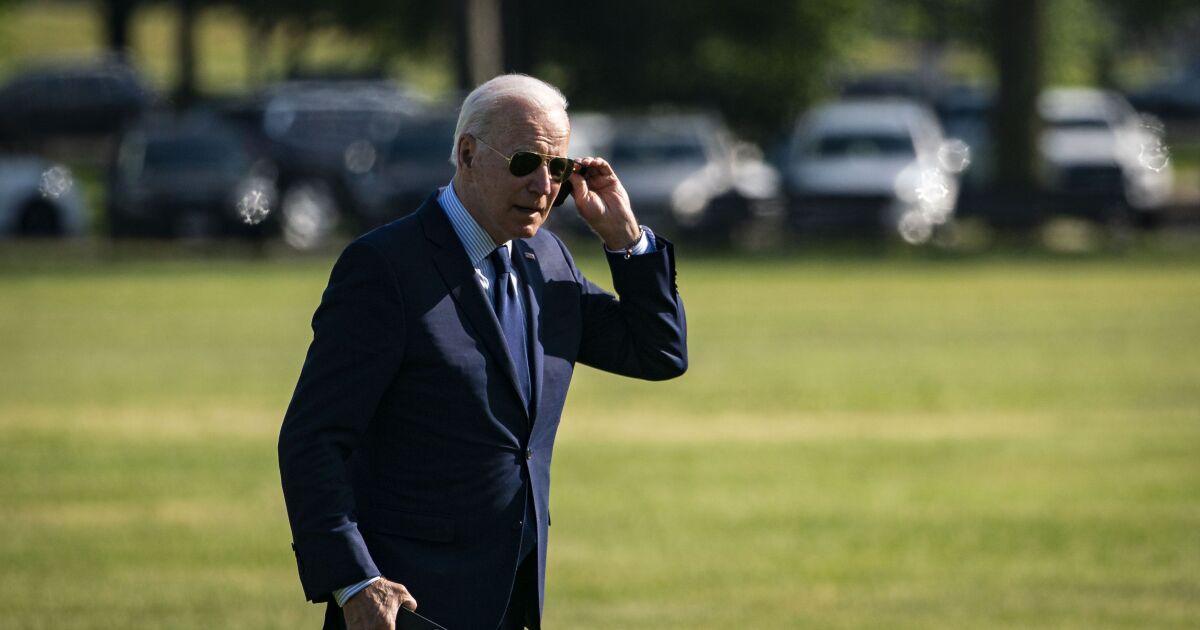 President Joe Biden issued his first full budget proposal Friday, detailing his ambitions to dramatically expand the size and scope of the federal government with more than $6 trillion in spending over the coming fiscal year, paired with significant tax increases on corporations and the wealthy.

But Congress controls the government’s purse strings, and with Republicans almost uniformly opposed to most of Biden’s spending and all of his tax increases, he and allied Democrats face difficulty enacting any of it into law.

In more than 1,700 pages, the budget illustrates Biden’s uncompromising vision to restore the nation’s infrastructure, expand the social safety net and combat income inequality with some of the highest levels of federal spending of the postwar era. The document pulls together for the first time a series of proposals unveiled over the opening months of Biden’s presidency, arguing that dramatic investments are needed to bolster a nation decimated by the coronavirus pandemic.

“It is a budget that reflects the fact that trickle-down economics has never worked, and that the best way to grow our economy is not from the top down, but from the bottom up and the middle out,” Biden says in a presidential message included in the document.

The budget employs some methodology that Biden’s political opponents would consider gimmicks. Like his predecessors, the president uses convenient but politically unlikely assumptions about changes to the Tax Code to reduce projected deficits while simultaneously projecting modest inflation and a broad rebound in U.S. employment.

The White House omitted some of the president’s trickier — and costlier — political ambitions, like offering a government-run plan for Americans buying health-care coverage. And even accounting for his least likely assumptions, Biden’s budget never balances, projecting annual deficits above $1.3 trillion for the next 10 years and national debt that hits $39 trillion, or 117% of annual economic output, by 2031.

The budget proposal also provides greater detail on how Biden’s previously announced jobs and families plans would be implemented, and how the administration envisions new changes to the Tax Code would work. Here are some of the key takeaways:

On the tax front, the biggest surprise in Biden’s proposal is that he assumes an increase in the capital gains rate would be retroactive to April 2021. This would prevent wealthy people from quickly selling off their assets before the end of the year to avoid the hike. Most of the other increases, if approved by Congress, would start on January 1, 2022, according a senior administration official.

The proposal allows many temporary Trump tax cuts for individuals and families to simply expire, as they’re already slated to do after the year 2025. But doing so amounts to something of a budgetary gimmick, as it allows Biden to bank the savings from higher tax rates snapping back in place on families making less than $400,000 per year — something he’s vowed not to let happen.

The budget does not address the state and local tax deduction, which may disappoint moderate Democrats from high-tax states that have pushed the White House to expand the deduction that Trump’s 2017 tax overhaul restricted to $10,000.

Biden seeks to ramp up spending on climate change across federal agencies, part of a government-wide approach to the issue that represents a dramatic shift from the Trump administration. That includes asking Congress to infuse money into neglected government climate programs as well as initiatives to help counter the threat with clean energy technology, zero-emission vehicles and increased energy efficiency.

For instance, Biden seeks $1.7 billion to help boost the energy efficiency of homes, schools and federal buildings, with some efforts specifically aimed at weatherizing low-income housing. More than $10 billion — a roughly 30% increase over the current fiscal year — would be dedicated to clean energy innovation outside the Defense Department.

The budget seeks at least $7.4 billion to buy electric vehicles for the federal fleet and the charging stations they will need over the next decade, including $2.4 billion for the U.S. Postal Service.

The Postal Service in February said Oshkosh Corp. had won a $6 billion contract for tens of thousands of mail-delivery vans, and initially said only 10% of the fleet would be electric. The award bypassed fledgling electric-vehicle specialist Workhorse Group Inc., and it set off complaints from lawmakers about buying a fleet that uses polluting technology.

Other efforts — such as $617 million sought for military installations — would help fortify U.S. government buildings against rising seas, more intense storms and other effects of climate change.

Overall, the Biden administration eyes more than $36 billion in spending to counter climate change, which the White House says would represent a $14 billion increase over fiscal 2021.

The Environmental Protection Agency, which has seen its budget decline by nearly a third over the past decade, would get $11.2 billion — a roughly 21% increase — and would be able to hire more workers, with a 7.4% projected gain in employment at the agency.

Biden also is asking for more money for foreign climate aid, though his request for a $1.2 billion payment to the United Nations Green Climate Fund falls far short of what the U.S. has pledged and what activists have said is necessary. Six years ago, the U.S. pledged to dole $3 billion to the fund that helps developing nations shift to clean energy and deal with the impacts of climate change, but only a third of that was sent before former President Donald Trump halted payments.

Biden would bolster aid for existing health insurance programs, expand public health funding, and advance policies like a government-run insurance plan for people buying their own coverage, the so-called “public option,” that Republicans and some moderate Democrats oppose.

It includes proposals to let people enroll in Medicare at age 60 rather than 65 and to allow Medicare to negotiate prescription drug prices. Those policies, favored by progressive Democrats, lack support from the party’s moderates in Congress.

Biden proposes to create a federal “Medicaid-like” insurance option in states that haven’t expanded eligibility for existing Medicaid programs for the poor. The budget calls for extending aid to lower premiums for people buying Affordable Care Act health plans, a policy enacted in the American Rescue Plan that is due to expire in 2022.

But Biden doesn’t actually account for the cost of sweeping new health care changes in the budget, instead simply asking Congress to act. That’s drawn the ire of some progressive Democrats, who suggest the omission from the budget is evidence the programs aren’t a priority for Biden.

Biden’s budget also contains no concrete plan to address long-term funding shortfalls for Social Security or a trust fund for Medicare, the health program for the elderly and disabled, despite campaign pledges to ensure the programs remain solvent.

Last year, the trustees of the two entitlements projected Medicare’s Part A trust fund, which pays for hospital care, would be insolvent by 2026 — but the Congressional Budget Office says the COVID-19 pandemic accelerated that time line to 2024. Social Security is projected to no longer pay full benefits after 2035.

Biden proposes a 23% increase in discretionary funding for the Department of Health and Human Services, to $134 billion for 2022. It’s among the largest increases, both in dollars and percentage terms, for any department in Biden’s budget.

That includes $8.7 billion in discretionary funding for the Centers for Disease Control and Prevention and a new $6.5 billion Advanced Research Projects Agency for Health to focus on medical breakthroughs in areas like cancer and Alzheimer’s. The new agency would be housed within the National Institutes for Health. Other public health priorities include addressing the opioid epidemic, gun violence, and HIV.

The budget also proposes to remove many prohibitions against federal spending for abortions, known as the Hyde Amendment.

Biden’s budget calls for keeping spending at the Department of Homeland Security at the same level as enacted in 2021, $54.9 billion, but intends to use that money in part to “implement a fair, orderly, and humane immigration system,” OMB said. That includes $345 million for the United States Citizenship and Immigration Services to address their backlog of naturalization and asylum cases. It also increases the funding of the Executive Office for Immigration Review by 21 percent to $891 million with the goal of hiring 100 new immigration judges to reduce court backlogs.

The budget also tracks with Biden’s commitment to increase foreign aid that was slashed by Trump. It includes $10 billion in humanitarian assistance for refugees, conflict victims and other vulnerable people abroad, plus $861 million for addressing the causes of migration from Central America to the U.S.

At the State Department and the U.S. Agency for International Development, global health programs would see an $855 million boost to $10.1 billion as the administration seeks to help countries address damage from the Covid-19 pandemic. In addition, the budget for the office handling refugee admissions would see funding more than double to $550 million after the Biden administration said it would reverse Trump-era restrictions on refugee resettlement.

The White House has framed the budget as a multi-year document, downplaying any one-year snapshot and instead emphasizing the long-term impact.

In 2030 — or the ninth year of its forecast, when Biden will be out of office — the budget projects that his proposed changes to the Tax Code will begin reining in baseline deficits. Before that, his new spending grows deficits while new revenue — such as a proposed increase in corporate taxes — ramps up. By 2030, new revenue begins to exceed new proposed spending.

“The president has proposed a comprehensive tax plan to offset these investments by asking corporations and wealthy individuals to shoulder their fair share of the tax burden,” said Cecilia Rouse, chairwoman of the Council of Economic Advisers. “It is imperative that this country makes up for decades of underinvestment.”

Biden’s team has downplayed deficit concerns, saying that the real interest cost of servicing the debt, or the payments adjusted for inflation, are negative and remain at or below 0.5% of the total economy.

Biden’s proposed spending remains relatively flat through 2024 — rising to $6.2 trillion from $6 trillion in fiscal 2022. It then accelerates in the following years, rising as high as $8.2 trillion in 2031.